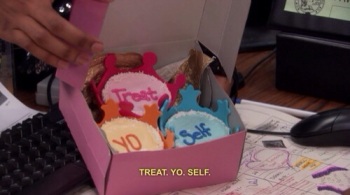 Seven years ago, I was a depressed gelatinous mass, exhausted from the stress of raising a newborn and an alcoholic man-child who managed to drink up a large balance on my credit card and pass out in places that were not our home, making it difficult to get to work the next day since he generally had my car. I was verging on the alcoholic-territory myself, often downing 1 or 2 bottles of wine a night after putting my baby down which was always a pleasant experience when that 3am feeding came. My shifts at work were sometimes 13 hours long, and some of those were worked alone. The 70 pounds that I’d put on during pregnancy were maybe half gone and none of my clothes fit. If my body could have made a noise, it would have been “pffffthbbbbbbt,” like a raspberry you blow or a slowly leaking whoopee cushion you sit on. My bank account was dwindling. My job was terrible. My boyfriend was The Worst. I had my friends and my baby, and that was that.

One day, one of my dear friends came over with a fucking fantastic pixie cut. “GIVE ME YOUR HAIR,” I said. My hair, you see, had not been in a salon since my freshman year of college where the lady at Regis cut it into some completely unmemorable, late ’90s bob. I bleached it and colored it with every red and pink shade Manic Panic had to offer and had a friend in the dorms cut it so it looked like Kate Gosselin’s before Kate Gosselin was even a THING and then I just started cutting it myself. In the months following my son’s birth, it was some sort of uneven bob, with ridiculous roots because I hadn’t dyed it (FERIA, BISHES) in months and months. It was just long enough I could use bobby pins to pin it up, but it was rather obvious I was using a pair of rusty kitchen scissors leftover from 1986 to trim it up. In short, it was a fucking mess.

So my friend politely refused to just give me her hair, but instead directed me to her hairdresser who was apprenticing at a nearby salon. “APPRENTICING?” I scoffed, because clearly I was doing better a job with dull, rusty scissors leaving my hair in stiff competition with Michelle Duggar’s for Worst but then my friend explained that it means she’s CHEAPER than the other people there and I heaved a sigh of defeat and made a goddamn appointment.

What happened next was fucking magic. My hairdresser and I recognized each other because we used to work a few stores down from each other at the mall, and we quickly bonded over EVERYTHING. While we were busy bullshitting, SHE MADE ME PRETTY AGAIN. She took that stupid fucking bob I’d butchered my hair into and…changed it. There were bangs. The ends that I blunted were neat and razored. Subtle layers distracted from my fading color and mousy brown roots. I nearly cried. Sure, I was still 35lbs heavier than I had been before getting knocked up BUT MY HAIR.

I soon thereafter started venturing into color, and I was in that salon every 6 weeks no matter what. Trims, color, whatever. It was the one thing I could count on to actually, right then and there, make me feel hot. For 2 hours, I could sit and talk to M about our lives, music, food, fashion, whatever and leave feeling like I’d had a fucking therapy session that actually, physically, made me look better.

As time went on, I started to get my ovaries back. I stopped drinking quite so much. I kept my wallet within my close reach. I bought a car of my own that my boyfriend was not allowed to touch and when he drove my old car into the ground, my response was, “TOO BAD.” Three years after I started seeing M, I kicked my boyfriend to the curb. I’m not going to sit here and say that I’m Samson and all my power is in my hair. It’s not. That’s stupid. But I’d be lying if I didn’t credit having amazing hair with boosting my confidence, making it easier to kick assholes to curb and demand respect. She’s seen me through breakups and pixie cuts and purple streaks and depression and blonde bangs and weight loss and new jobs and this Stevie Nicks thing I’m going through right now. In turn, she’s shared parts of her life with me that I wished I could hug away, or at least make better with vegan baking.

M is, clearly, no longer apprenticing so her rates her higher. But like clockwork, my ass is in her chair, no matter where she is, every 6 weeks. I get asked with alarming frequency if I, myself, do hair. I laugh hysterically because I can barely operate a pair of kitchen shears anymore without jamming them into my hand (true story). But then I say, “No! I go see M at [salon name here]. She is the best person in the world. Go see her.” AND THEY DO. Because if she can smoke this wig and make it look amazing, she can do anything.

It costs money to get my hair done. Sometimes, a lot of money. More money than some people would spend, maybe. And that’s fine. I stopped trying to justify it ages ago, because, frankly I don’t need to justify what I do to feel amazing to anyone at all. Yeah, I work out intermittently and eat fucking goddamn salad for lunch 4 days a goddamn week and drink lots of water and use eye cream and can’t resist a good lipstick when I see it. But not one thing compares to how I feel when I leave M’s chair. And as a bonus? I’ve made an amazing friend, too, who has inspired me in so many ways to do all sorts of rad shit (but not go vegan. Sorry, M.) (She took me to see Springsteen for my birthday last year which makes her better than literally any boyfriend I have ever had, and maybe that means we are married now? I’m not sure.) So the moral of the story is: it’s worth the money to spend on something that will carry you through 6 weeks of feeling like a fucking badass. Some people might think of you as vain, but maybe they need to go sit in the chair sometime, too. (Also, to never cut your hair using kitchen scissors. That is a really, really important moral also.)