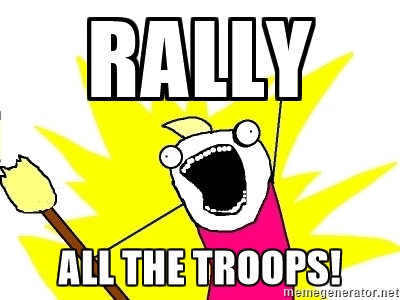 There’s a growing sense of dread that’s come to sit on my shoulders. I know I’m not the only one. There’s an uneasiness that lives somewhere between my stomach and my heart, a churning ball of anxiety and rage and sorrow. There is an unshakeable tension between my shoulders and a slight tremor in my hands. I’m becoming terrified of our world, our country, our society.

I don’t have to spell it out. Your fear might not have the exact same triggers as mine, but it’s there in all of us right now. All of us who pay the slightest attention to the world outside. Like a old Maine fisherman, we’re sitting on our front porches, looking at the sky and muttering “Stahm’s a’ brewin’.”

Underneath all of that scary, there sits a tiny shred of hope, though. I can’t help my streak of optimism and I’m trying very hard to focus on it, nurture it now when it is needed most. My hope comes from seeing Bernie Sanders almost pull off the upset of the century and reminding Democrats what liberal is. My hope comes from watching crowds gather in solidarity around victims of violence. My hope comes from national outrage at reduced sentences for the affluent white male.  My hope is that more and more people are waking the fuck up.

There will always be garbage people in the world. That’s a fact of history and human nature. But I have this feeling that maybe the rest of us are ready to take out the trash. Maybe Trump is the Worst Person In The World, but watching him incoherently rant and the mindless hoardes that follow him is finally exposed what those of us who pay attention already knew. The current Republican party is a bigoted cesspool of greed and nationalism and assault rifles. And, sure, we can have a screaming match about how the Democrats aren’t any better, but, you know what? Fuck you. We are.

This is the thing that gives me a tiny glimmer of what could be. We’re getting angry. We’re mad as hell. Democrats, liberals and progressives are finally finding their rage. We have a tendency to talk. A lot. To want to discuss issues in an inclusive fashion, find a consensus and pass a measure supporting it. To use logic and reason to convince people of how the world works in calm voices. To accept that change must be gradual and that is acceptable. That we shouldn’t answer anger with anger, but to project hope and love and the magic of that will be enough. It seems like all we needed this whole time was a villain to bind us with the weapon Republicans have so deftly deployed in the past 35 years – TERROR/RAGE.

When someone accuses you of wanting to take guns and abolish the 2nd amendment, tell them they’re half-right, that you actually want to enforce the 2nd amendment as it was written. That we want to bring that “well-regulated militia” bit back to the front. That the 2nd amendment wasn’t written to allow any asshole with grudge to buy an assault rifle, but to have a military. That unless you’re a hunter or in a government-regulated militia, you don’t get a fucking gun.  Tell them there’s a difference between a hunting rifle and a high-capacity AR-15 and one should be legal and the other shouldn’t. That there are technologies to actually make guns safer and our government won’t allow them to be manufactured. That the NRA isn’t fighting for them, they’re fighting for the gun manufacturers that hold more power and money than they can even begin to comprehend.

The time to swallow our words and pray for change has passed, thanks be. That’s never been my style and I’m glad to see it go. It’s time to use our voices to start and end the arguments, to force knowledge on the ignorant and scorn the unbeliever. It’s time to proselytize, to wade into the vast world of the uninformed and wake them up. We need to leave our carefully curated social media feeds that confirm our views and have hard conversations that involve more than a 140 characters and emojis. Let’s stop in-fighting and remember where the problems actually exist.

We need to do that thing we all dread and confront our family and friends and co-workers when ignorance comes out. If they already label us the loud-angry-feminist-POC-queer-liberal-asshole, then let’s fucking own that label and tell them what we really want to say but never do. Practice your speeches and comebacks when they spout nonsense and lies from Drudge or Fox. Being civil and being silent are not the same thing. Use your knowledge as a weapon, cutting down those who stand against you.

It’s time to follow through and put our words into deeds. It’s time to fight the system and fight within the system. We can do both. We can use the rules that are stacked against us to push for change – meaning get off your apathetic ass and vote. Drag along everyone you know. Vote in your local, state and national elections. Take ten fucking minutes to google your town and find out what’s going on. Get outraged at local events as much as national ones. Talk to your neighbors and the other moms at school and your coworkers and your family and your friends about upcoming elections. Become that annoying person that asks everyone they see on election day if they voted. Checking out is no longer an option.

My hope is a battle cry. It is the collective screams of frustration that have built over the years. It is a primal roar of rage and fear and the unyielding need to fight and protect my family. It is answered by the millions who realize that this may be it. We have enough cultural references to know what we’re feeling; this is the moment before. This is the time for inspirational speeches and beating our swords on our shields. I’m making it sound epic because it is. This is Dumbledore’s Army against the Death Eaters; this is the free people of Middle Earth against Sauron; this is the Rebel Alliance against the Galactic Empire; this is Simba against Scar; it’s the Clash of the Titans and we’re ready to release the kracken. It won’t be easy and it won’t be fun, but it is absolutely necessary. It’s time to take our country back and move it forward.