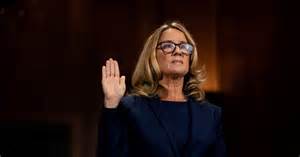 I’m so fucking tired. Both literally, because it is after 10pm and I am old, and figuratively, because I watched all of Dr. Christine Blasey Ford’s testimony and most of Brett Kavanaugh’s and the majority of the questioning from both sides. I listened to the commentary on MSNBC and watched the clips of his interview on Fox News and I’ve overdosed on toxic masculinity.

I’m tired of being a woman, but yikes on the alternative. (Not in a gender-identity sense, so I hope this doesn’t offend all the non-binary and trans and intersex folx out there who I love and see and give all the high-fives to. This is a majority of the world, binary, cis-man/woman weariness that is sitting in my bones.) I think I need a good cry but I’m too numb. I think I need to break something, because the rage is overwhelming. I think I should probably just sleep but there are too many words in my head and hurts in my heart and I feel like a gaping wound in a way that most men will never, ever, ever understand.

I think it’s the laughter, the indelible laughter in Dr. Ford’s hippocampus. The same laughter I can hear and you can hear and every woman can hear. The laughter that rings in our heads and our hearts and our very bones vibrate with the laughter. They laugh and it gets caught in our hair and our lungs and our wombs. It hurts everywhere, these laughs. The laughter of boys being boys, of knowing there are no consequences, the joy and delight in taking a person and making her an object.

And I am tired that we haven’t gotten better since Anita Hill. That Lindsey Graham’s outrage will be applauded by a segment of the population. Including women. I’m tired of women who uphold and embrace the patriarchy as much as I’m tired of the patriarchy itself.

The brilliant and amazing Roxane Gay edited an anthology earlier this year titled “Not That Bad: Dispatches from Rape Culture” that I attempted to read but it was glass in my throat and sand in my heart. I didn’t have the fortitude. I wonder if Lindsey Graham would be able to read it. I wonder if the women who support him could.

He really pissed me off today. His sympathy for Brett Kavanaugh and his outrage at his fellow Senators was shocking. Is it a good sign that I can still be shocked by the conduct of men?

But still, the laughter, it’s haunting me. How often are we told to lighten up, to take a joke, to smile, to agree with our abusers that it wasn’t abuse? How often do we grin and bear it? How do we defend against the stereotype of joylessness when the laughter we hear is knives in our bellies?

Indelible. That which cannot be eliminated, forgotten, changed, or the like.

I hear the laughter, too. I heard it when I was catcalled. When the car full of boys hollered. When they slowed down. When they surrounded me in the hall. When they shouted at me to stop what I was doing and gift them my time and being. The laughter that accompanies “it wasn’t me” and “I didn’t really mean it” and “it was a compliment” and “don’t be so stuck up” and “bitchslutwhorecunt.” The laughter when you say stop and don’t and please and when you scream.

I’ve never been raped. I’ve never been assaulted in a way that would be considered a crime. I’ve never been hit. I’ve been lucky. I’ve always felt lucky – not strong or blessed or impressive or more right – just a roll of the dice luck. But I’ve heard the laughter. Indelible and deafening and haunting. I’ll bet you have too.