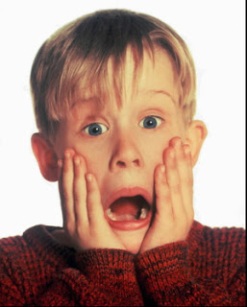 So, today on the ol’ Facespace, a friend of mine posted that she’d witnessed at Target a woman who left her 8-ish-year-old-daughter alone in the girls’ department while she went to go, presumably, take a leak. My friend posed a question essentially asking if she was paranoid, or was there a crack in the woman’s judgment? After reading the comments responding to this post, I have to ask: What the fuck is wrong with people? The majority of people commenting said something to the effect of, “No! You’re not paranoid! I never let my children out of my sight ever because bad people!” Which, okay. I don’t agree, but you do you, and you know your kids better than I do! BUT! One person responded that he thought the mother should have her “uterus revoked” for committing such a heinous act of terrible parenting, clearly on par with Joan Crawford or Michael Lohan. This poor woman who NONE OF US KNOW at Target is now being judged, like, way harsh, Tai. Clearly, I don’t think this was my friend’s intent in posing this question on Facebook. Sometimes parents like to gauge where they stand. And, for the record, I don’t think my friend is paranoid for not considering this sort of thing whilst shopping for facewash, Oxiclean, a dvd copy of Meatballs, and a new sundress. If someone doesn’t feel that his or her child is ready to be alone in Target, then that’s that. But was the woman who went pee really deserving of all this bullshit? (Hint: NO.)

About 6 months ago, my son and I were at the grocery store. It was a weeknight, right after work, and I had a bunch of shopping to do, so we had a cart. We get into a line, I unload the entire cart, and my son informs me that “Mom I gotta pee SO BAD” and grabs his crotch for emphasis. As I’ve mentioned before, children are The Worst, so OF COURSE he would wait until I had the ENTIRE CART of groceries unloaded onto the conveyor belt before informing me that he had to pee. He could not have had to pee 5 minutes before, when we were in the pharmacy section, two feet from the fucking bathroom. Sigh. So I said, “Well. You know where the bathroom is. Go ahead.” And he stared at me. And then went running towards it. I guess he had to go.

What followed was me holding my breath while the checkout lady rang me up. I was in an aisle closer to the pharmacy area, where the bathrooms are conveniently located, but they still were not in my line of vision. But, as I kept telling myself, if I kept my eyes toward that area, there was NO WAY he could leave the building without me seeing him. Or a million other people. Including the people who work there. Who have known him since he was a baby. And sure enough, just as the bag boy was loading the second to last bag into my cart, my son came skipping up the aisle with a big ol’ grin on his face. He had successfully navigated to the bathroom and back to me on his own. Was I nuts? Well. Maybe. But I also felt comfortable letting my son go to the bathroom on his own. That was my call.

My parents had the luxury of me being incredibly independent and trustworthy from a  very young age. I would entertain myself for hours on end, and was perfectly happy doing so. I vividly remember being left home alone for the first time when I was my son’s age. It wasn’t for a long time, and I sat in the living room watching tv until they walked back through the door 30 minutes later. By the time I was 8, I had a baby sister and my mom would leave us alone while she ran next door to the neighbors’. When we went to the mall, my parents would allow my best friend and me to go gallivanting around (mainly to Claire’s to pick out awesome earrings in the shape of traffic signs that read “CAUTION: PARTY ZONE” on them) so long as we met them back at the appointed place in ONE HOUR. I was full-fledged sister caretaker by the time I was 9, and the New Years Eve I was 11, guess who was home alone with a 3 year old? (Hint: It was me.)

Now, let’s hold on. Because I know my child’s limits. Would I leave him in the boys’ department to go pee? Nah, probably not. Well, not now. Probably in 2 years or so. I’ve left him at home alone before, for, literally, 10 minutes, while my roommate and I went (literally) around the corner to pick up a raised bed garden. I told him, “STAY IN YOUR ROOM.” And he did. And the house wasn’t on fire, the dog wasn’t in the oven, the gates of hell had not opened. This isn’t something that will become habitual, but it was reassuring to know my little boo is getting older and more responsible.

People often mention people snatching children, and they are rightfully worried about it. But how long do you keep your kids next to you? My son doesn’t want to come into the ladies’ room with me. He’s uncomfortable in there. But that horrible case out of Cleveland? Where those women were held captive and raped repeatedly for years? They were all kidnapped. They were grown, or at least over the age of 15. Should they have been walked to and from school by a parent or guardian at the age of 15 or 16? Jaycee Dugard was 12 and lived in a “safe” neighborhood. These are HORRIBLE THINGS THAT HAPPEN. But what about children who were entrusted to adults in the Boy Scouts or the Catholic Church, who were abused for years by trusted members of society? My point here is not to take away from either crime or to make anyone even MORE paranoid. Each day, my son gets a little more independent, and each day we both get a little more resilient. Each day, I wonder, “Am I not worrying enough?” But each day, he gets older and I can’t keep him next to me all the time. My job is to raise a person who can give back to society and he can’t do that if he’s living under my microscope all the time. It’s a tough call, but at the end of the day, you do what’s right for you and your family. If that means going pee while your kid hangs out looking at Tony Hawk t-shirts, then so be it. But I’m not going to call CPS.