As a cis/white straight-presenting hetero-partnered mother of two, it is a privilege for me to feel the outrage and horror I feel today.

As a rape and sexual assault survivor, well-meaning ally, and marginal member of the queer community (a bi girl who fell in love with and married a dude), and someone trying to work daily to check my own privilege, I am human, and I am just plain scared. As a mother trying my hardest to raise two intersectional feminist men conscious of their privilege (& appreciative of consent) so that they can actually impact the world for the better from day one and don’t have to massively fall apart reading “Unpacking the Invisible Knapsack” later in life to start making themselves useful – I am a messy heap of mess.

Yesterday my mother watched our toddler while we voted, and told him all about the great civic duty we were participating in. A few times last night he asked “did you have fun voting, Mom?” But this morning I pulled my three year old up on my lap and told him that Mommy and Daddy did not get the President that we voted for. That instead our country has elected a president who is a Bad Man. I told him that this means that we might start to hear people say more things that we know are wrong. His dad explained that this President only thinks that people like himself are important.

I reminded him that we know that everyone is important, no matter what they look like, or where they come from, or what they believe in, or who they love. He told me he thinks we should send the Bad President to jail. I told him he’s right.

And then I looked at my baby, who is too young to explain anything to at all, and I sobbed.

And then I cried with a friend I love and respect very much about the absurdity of this – because our children are white boys, and as such, are exempt from the worst horrors of this incoming administration and the public “understanding” (to say the least) of the ongoing hate crime that exists even in its language. My talk with my kid, though difficult, was so much easier than so many other mothers across the country this morning. Of course, we will now commence with destroying the planet entirely unchecked, and that hurts everyone universally. But last night and this morning systemic racism, long-standing sexism, and ever bubbling anti-LGBTQ+ sentiment writ themselves large AF across cable news and if you can’t see that, then I’d like one of your tail feathers, mister ostrich.

Hear this: this scary new world order will NEVER be as dangerous for us, white people, even for a second, as it is to wake up and live every single day as a trans woman. Or as a black man. Or as a woman wrapped in a beautiful hijab. Or as a member of the native community whose land we’re in the process of stealing Yet Again. I’m not going to spend this post regurgitating co-opted narrative of other people’s experiences, but I do encourage you to (respectfully) learn about the lives of other people in this country outside of your bubble and beyond the abstract. Don’t make someone already exhausted by oppression educate you – educate yourself. The list goes on and on and on.

On a broader scale, if you thought combating rape culture was difficult before – think again, because we just said it was OK with us that the leader of our country brags about sexual assault. If you felt devalued as a woman in America before – congratulations, it’s worse today! And you know what, fellow white ladies? We did it. We are not as awful but every bit as complicit as our oft-loathed co-demo, Uneducated White Males. 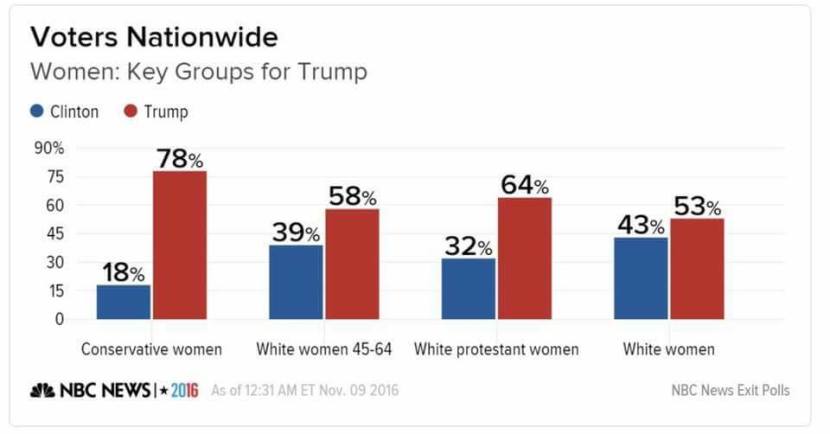 I know not a single woman who posts on this site is represented in those red bars, but we know some of the women who are.  We might not be able to get to every one of them but it’s our job to try.

In the next few days people will be energized to dream up all kinds of action – I urge you to take on as much as you’re able, more than you think you can handle, and keep it going.  Keep going in January.  Keep going in March.  Keep going all the way through to the next election, which is in only two years, so that we can establish a momentum and reclaim at least one check/balance for inclusion.

I am proud that today I have friends who are already working to organize new community groups, learn something about social justice and work for it, donate to Planned Parenthood or the ACLU, and some who intend to literally write words of love for all of our neighbors regardless of where they come from and what they look like and who they worship on the actual sidewalks of our actual city. I am so proud that this is my community, but the truth is that it’s a safe sweet echo chamber. Luxuriating in that safety is a timed activity.

Mourning and grieving for a day was acceptable. I won’t invalidate your/our feelings or add to the gaslighting – I know how optimistic you/we were. But please don’t forget that as scared as you are and as scared as I am – of the changes to our planet, bodily rights, taxes, jobs, health insurance – it is nothing compared to the license for bodily harm to others that our country just signed off on. Protect one another. Be vocal about inequality of all kinds. Learn about microaggressions and tone policing and don’t stand for any of it. Call it out and be humble and let yourself get schooled by someone who is actually affected if you’re talking out of turn. And you will talk out of turn. I might be talking out of turn right now but I’m trying my hardest and will try harder still. Get out a pad and pen and draw a big old cloud in the middle and brainstorm like you haven’t since third grade, because we should have been doing it already. Here’s what is at stake, which today is my biggest motivator:

I’m a millennial by a month because I won’t turn 35 until January, but I’m a solid ten years older than this demographic – which, please note, is not broken down any further than age, so these young folks are making a team effort. We need to mobilize to preserve their passion for equality and keep this country safe for all of them. This is not the time to look at this map and be comforted and wait.

It’s time to man the watch, it’s time to be ever present, it’s time to be vigilant.  Do something beyond just thinking it’s wrong and being bummed that half of the country has no problem being public about how racist/sexist/ableist/etc they have always been. And please do it quickly, and let me know, and I will be there.

Those of us who have never really considered your privilege beyond the limits placed on us because of gender can benefit from reading the piece linked above, and those of us who already have should read this: On “Woke” White People Advertising Their Shock that Racism just won a Presidency, Medium, Courtney Parker West.  And don’t stop ever.  You can do this.  We must do this.  This work is our responsibility, do it with honor and humility and love.  Ever read that awesome quote about how men need to take the space they occupy and make it feminist?  Did you like that quote?  I sure did.

We need to take the space we occupy and crack it wide open.  Now.

Note: I wrote this as quickly as I could, before taking my kids to preschool/a friend’s house, before work, and on my work breaks. I linked to everything without permission because time and scope but hopefully driving page views is OK and if not I’ll take stuff down. For the narrow views I express here, I apologize. In the context of this blog I am deliberately addressing white people, primarily white women, because the voting demographics have me feeling deep, deep shame for not using my agency to address them before in a more effective way. I voted for Sanders in the primary but still mustered the wherewithal to cry when filling in the bubble next to a woman’s name yesterday morning. I am queer, have ADHD, a self-proclaimed soft socialist, a rape and sexual assault survivor, and honestly I could work a lot harder to fix this for our kids, and I will.